Alert, alert! Today’s giant cover love hug is not actually being given to a novel by the name of Jack Samsonite. The title’s a bit longer that.

Actually, a lot longer than that. 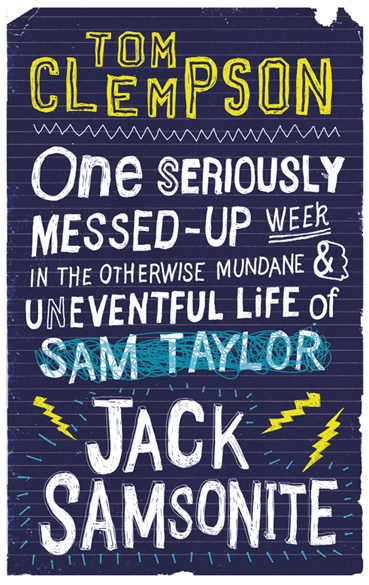 You can see my logic in shortening the title in this post’s title, yes?

When it comes to browsing cover art in the wild (not just YA), my brain tends to sort each novel’s face into three different categories:

And while my mental sorting probably takes around .0234 seconds to compute, I honestly wonder about others’ reactions towards Jack Samsonite’s cover. I’d imagine you’d fall in one or two camps — you love it or you meh it. Today’s post is a cover love post, so you know exactly which camp I fall in.

I’m a typographic nerd. A fontaholic. Call it what you will, but nothing makes me more squeamish than seeing a cover reveal for a highly-anticipated YA novel only to find out that they picked the same font I used when designing a custom Xanga button back in 2002. What I really love about Jack Samsonite’s cover is its long stream-of-consciousness title. The illustration looks like an idea that started out as an easygoing outline and grew into a furious scribbling of extraneous doodles. Another set of eyeballs may call it a little bit too juvenile. My set of eyeballs calls this a charismatic cover. There’s something magnetic about art that purposefully looks homemade (in a good way). Yes, there’s something appealing about matching the perfect font family to create a specific tone within cover design. But there’s also something that can be said about a title’s type treatment that doesn’t seem to focus on kerning or ligature.

After initially ogling the cover over on The Crooked Bookshelf’s blog, I hopped over to author Tom Clempson’s website to see if I could discover who the cover designer was. One short Twitter conversation later, I was on my way to digging up as much information as I could about Jack Samsonite’s cover designer, Tom Sanderson.

Here’s a dish of some other design work Sanderson’s cooked up:

Seems like I’m not the only one who’s kind of a typographic geek, eh?

My absolute favorite cover he’s done so far (or at least from what I’ve seen on his portfolio) is this:

It’s a book cover full of book covers! And it’s not all composited. It is an actual photograph of book covers. You can only imagine my sheer abundance of joy multiplied exponentially, right? James Morrison blogs over on Caustic Cover Critic about Puffin By Design’s cover art and even includes a photograph of Anderson at work aligning the books around the title.

Bravo, Tom! Oh, and yes, I mean both Toms. I’m looking forward to more of Tom’s (Sanderson) design work and can’t wait to get my hands on Tom’s (Clempson) One Seriously Messed-Up Week: in the Otherwise Mundane and Uneventful Life of Jack Samsonite.