2011 marked the year of finishing my very first graphic novel, Blankets by Craig Thompson (READ IT, IT’S AMAZING). Ever since, I’ve actively sought out more and more graphic novels, and have been recommended a ton so my TBR pile is already outrageously out of control. While ambling around the internet one evening, I happened upon the work of Kirk Benshoff — a talented graphic designer and art director responsible for the new face of the wildly popular Haruhi Suzumiya series. A few years ago, the Japanese light novel series was finally translated for English-speakers to enjoy, along with an overhaul of the cover art, to boot: 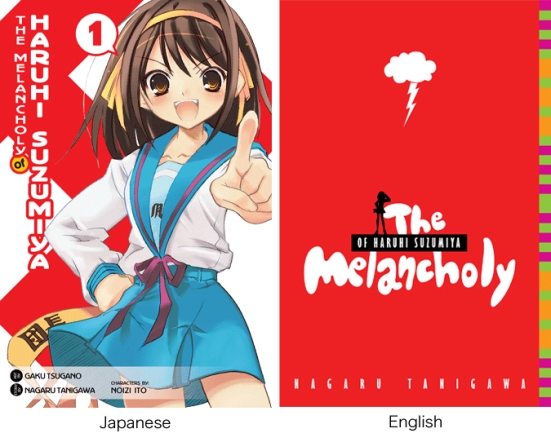 I immediately knew that I wanted to pick Kirk’s brain as soon as I saw the artwork. I couldn’t begin to wrap my head around what it’d be like working with cultural barriers and how or if they’d bleed over into the aesthetics of designing for a new, English-speaking audience. I mean, have you ever wanted to know what goes into rebranding for a different language? While staying true to the story’s content and characters? Of a brand that happens to also have its own anime series, web series, film, and video games too? If your answer’s YES, like mine was, you’re in luck. I’m so excited to have Kirk on the blog today!

TCG: What was it like being tasked to start the redesign of a highly successful and very franchised Japanese series? What were the challenges in bringing it to an English-speaking audience?

KB: Haruhi was a pretty challenging project because it had a very difficult hand of variables that needed to be addressed. We had to keep the tone of the original series while making the property appeal to an American audience, respect the property, for it already had a large audience in the United States and abroad, and  appeal to a new readership that does not read manga and light novels. We also had to find something that not only would be approved by everyone state side but also the licensor and creators in Japan.

The first book was the biggest hurdle, not only because we were setting the tone for the series, but also introducing this character, Haruhi Suzumiya. Who had already been a global phenomenon, but was largely unknown in the United States outside the manga/anime community. Our goal was to lure readers who don’t normally read comics to read Haruhi. To prevent non-comic readers from dismissing the book altogether based on the original cover art, we decided to redesign the series.

In the end, the look gravitated to a more simple and bold direction because of the constraints. In the end, I couldn’t be happier with the designs.

As someone who normally wouldn’t read manga/light novels before this year, consider me hooked via cover art. The cover redesigns are bold, simple, and eye-catching. What were your original ideas/concepts for the cover series? Did you get a chance to read a majority of the books, or were you given an overall synopsis for each novel?

No, I couldn’t read the books beforehand because they only existed as fan translations. Fortunately, I’m a pretty big anime fan and had seen the anime series, so that helped a lot in designing the first book.

Re-illustrating the characters was not an option because of conflicts with the original art/brand, and since we were trying to appeal to a broader audience, using the original artwork wouldn’t work, either. So we explored doing a photographic version of Haruhi and we went as far as to getting our hands on a costume, hiring a model, and doing a photo shoot. But something wasn’t translating through the photos, they seemed to be lacking something. There is a quirkiness with Haruhi and her friends that we didn’t think were conveyed in a photograph.

Whoever said a picture was worth a thousand words, right? Apparently those words were simply lost in translation. (Ha, not one but TWO adages!) Interesting to see the whole concept carried all the way to a photo shoot stage, but I’m sure it was frustrating as well — which brings me to my next question. What were the easiest parts of the design/process for the series? The hardest?

I wouldn’t say any part was necessarily easy, but the concepting was the most enjoyable and frustrating at the same time. Most designers will have an attachment their best ideas, and when you have to nix those ideas and come up with new directions it can be hard. But I love concepting, so I set new parameters to the project and get going again.

I think the hardest thing was waiting to hear back from the licensors and creators. Because of the time difference and the time it takes to get the designs in front of everyone who needs to review everything. I was biting my nails down to the quick.

I’m a huge fan of quirky art all over the spectrum. I love everything from character artists like Friends With You and EBoy, street artists like Banksy and Neckface, to toy designers like Michael Lau and Frank Kozik. I surround myself with people who make art as well that constantly inspire me like my buddy Jonathan Lopes who makes LEGO sculptures and my wife who is a crafting addict.

Name three of your favorite pieces of cover art (they don’t have to be YA) — designed by someone else.

This is a toughie. There are so many things out there that stop me in my tracks. I would say right now I’m in love with the work of Olly Moss. All of his designs and illustrations are well thought out and just beautiful.

Thank you so much for taking the time out to stop by the blog today, Kirk. The Haruhi Suzuyima series is at the very top of my light novel list! To check out more of Kirk’s work, you can find him on his website, tumblr, or Twitter.

3 thoughts on “behind the design: kirk benshoff & the haruhi suzumiya series”