I wasn’t quite sure where to put this post, to be honest. I normally talk cover art here at TCG, my Tumblr isn’t meant for holding more than 100 words, and I sure wasn’t going to start another new personal blog.

So I decided to post here. Feel free to skip over this entry if you’re used to the design-related posts, but read on for my St. Louis adventures!

For those of you who don’t know, I’ve been online friends with Adele for approximately 80 gazillion years. Well, to be honest, just a little over 4, but since we’ve never met in real life, that translates to 80 gazillion years. We met through an online mutual friend and just sort of hit it off. We’ve talked more than just books and movies and blogs — we’ve been there for each other through big life changes and have been moral support for when times were both good and bad.

So I was pleased as punch when Adele told me she was going to be presenting at the YALSA Lit Symposium in St. Louis this weekend. It was a long few months between booking my flight and finally meeting her at the airport last Wednesday. When we met, it was a wonderful moment of hugging and looking like loonies outside the Southwest baggage claim.

Dang. We look tired. But HAPPY!

I’m not quite sure how to summarize those 4 days, but I would definitely say they were jam-packed with things to do. I don’t think I sat in the hotel room for more than an hour at a time (not including sleeping). After landing and picking up the rental car, Wednesday night involved grabbing a late night bite at Flannery’s, where for some reason I thought it’d be a good idea to get egg rolls filled with corned beef and cabbage. (Note: don’t ever order those anytime, anywhere.) 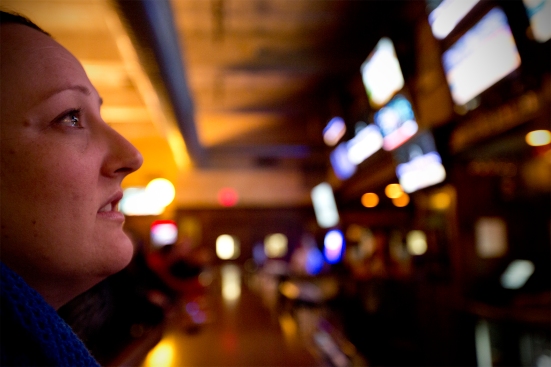 Thursday morning involved eating at Rooster. I had a B.E.L.T. sandwich and I don’t quite remember what Adele had but it did involve potatoes, egg, and me stealing some of it. Breakfast definitely made up for the nasty egg roll experience. 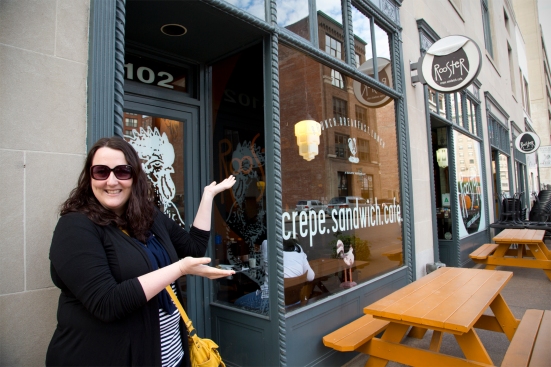 Then it was time for shopping. Adele had never been inside a Sephora (I KNOW RIGHT) so of course I had to correct this problem — and make her break the bank in the process.

We shopped for a few hours at the Galleria mall, then headed over to The Loop to visit the pop culture shop, Star Clipper. Judging from the website, I thought it was just a shop that had fun pop culture/comics items — it turned out to be an awesome little comics shop as well! So of course I had to get a book, even though I shouldn’t have — OH WELL.

And then! Sweetie Pie’s! The restaurant that changed Adele’s life. She’d never tried soul food before and it was on my list of restaurants to visit in St. Louis since it has soul food (duh) and its own reality show on OWN. We got a TON of food. And then ate like, half of it.

I’m not sure why I’m not smiling all big like I normally do. It may have been because I thought I had food stuck in my teeth or something.

After Sweetie Pie’s, we rolled ourselves out to the car and drove over to the Missouri Botanical Garden where I proceeded to mock art like the great art appreciator that I am.

No, really, you all know I love me some art. 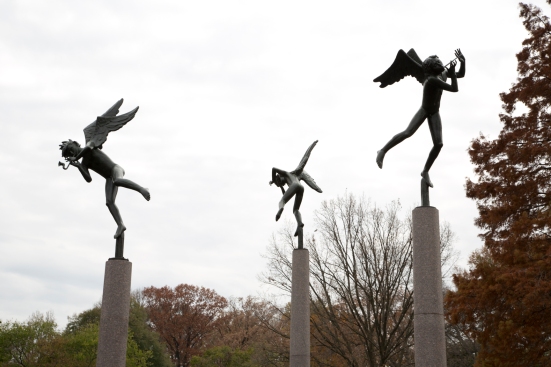 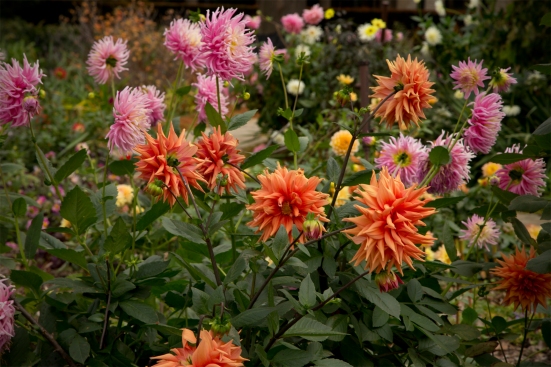 Adele loves squirrels — they don’t have them in Australia — so of course I had to take a picture of her taking a picture of a squirrel because I thought it was totally weird. I may have whispered, “I hope it doesn’t have rabies and bites you” while she was taking this photo.

Friday morning involved pre-conference panels for Adele, so while she was off doing librarian things, I went and stole off to other corners of St. Louis. First up on my list was the Cathedral Basilica, which I hope I can do some sort of justice with a few of my favorite photos: 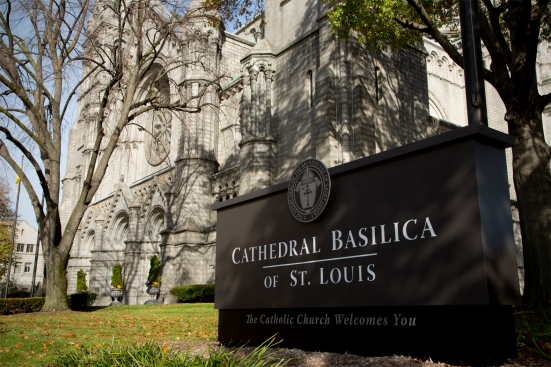 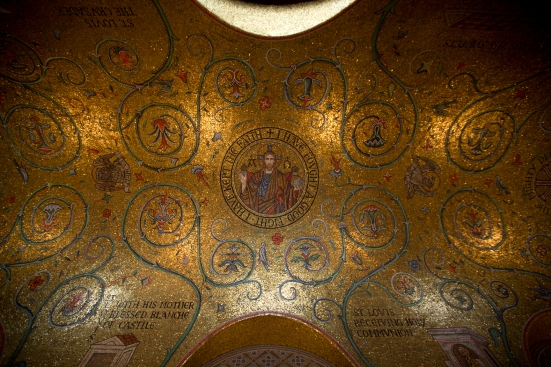 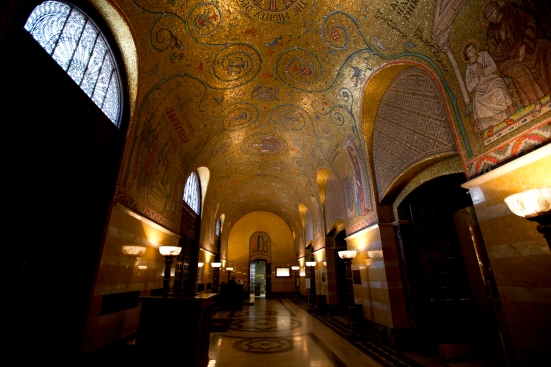 Afterwards, I headed straight to the Forest Park area to check out the St. Louis Art Museum. Parking was a bit atrocious so I didn’t spend near as much time there as I would’ve liked, unfortunately. 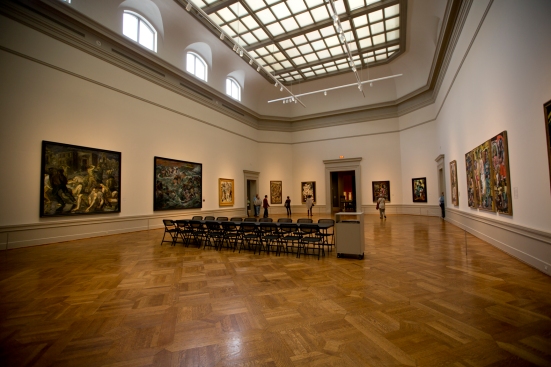 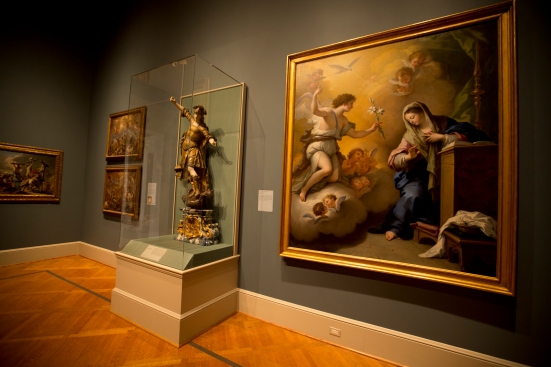 After getting in a few hours of staring at gorgeous artwork, I headed to the next best place I could visit while wandering the streets of St. Louis.

A CHOCOLATIER, OF COURSE. 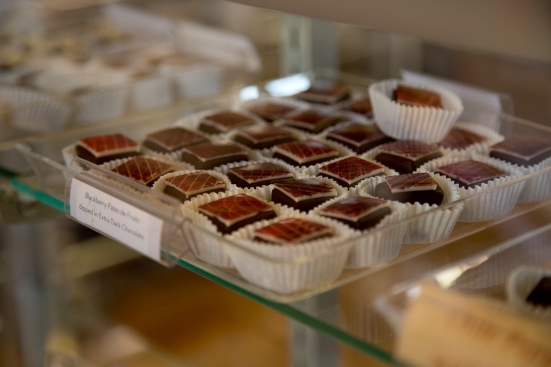 I ended up buying a few truffles for myself and Adele, some candy and dark sea salt chocolate truffles for hubs, and seriously refraining from dashing back in to buy more when I got to my car. Little Rock doesn’t have any chocolatiers, so it’s my weakness when I go out of town. (Get on that problem, Little Rock.)

After leaving Kakao Chocolate, I went and picked up Adele to take her back out to Forest Park for lunch at the Missouri History Museum. I’m tellin’ ya, Missouri does not mess around when it comes to history, art, and architecture.

Or food. I had a delicious prosciutto and grilled chicken sandwich, and while it was tasty, it wasn’t near as pretty as Adele’s vegetable tart.

Friday night, Adele had to prep for her Saturday morning presentation with her co-presenter, so I headed to Left Bank Books for Brian Katcher and Deborah Heiligman’s author event. Deborah read aloud from her latest novel, Intentions and Brian read from an upcoming novel that should hopefully release in 2015 (that I’m really looking forward to reading!). I really enjoyed listening to him talk in different character voices.

And then! I finally got to meet author Antony John! Talk about a moment for me! — Antony was one of the very first authors I interviewed and one of the first supporters of TCG. He is so incredibly nice and funny and if you haven’t read his work, you absolutely should. Five Flavors of Dumb is my absolute favorite, and Elemental comes out at the end of this month. (Stay tuned for a cover interview!)

After the event, I got to meet Deborah, Brian, David Levithan, some lovely Left Bank books and SLPL staff, and Torrey Maldonado as well. For those of you who have not had the pleasure to meet Torrey, I’m sorry. That man is hilarious (and has so many fun stories), and I will definitely be checking out his YA novel, Secret Saturdays. Adele joined us after her presentation prep and we had a fun time hanging out.

I also got to meet Audrey, Antony’s wife, who is incredibly funny and awesome and so down-to-earth and friendly and I would like to be her best friend some day.

Saturday morning was Adele’s presentation, so I took some photos of her panel, “Globalize Me! Young Adult Literature from Outside the U.S.” She and her co-presenter, Cathy Andronik, did a fabulous job and got lots of great feedback from the audience. Adele’s a serious pro — it was definitely interesting watching her put her presentation together and formulating exactly what she wanted to say, and then watching her talk about Australian YA in front of a packed room as if she and I were talking about TV or food. Except, you know, she was being way more professional and posh. So very proud of her.

After taking pics at Adele’s panel, I headed out to the Galleria area again and met my long-time friend from high school, Phatch, for lunch at Mai Lee (Vietnamese). Talk about a convergence of YA-related activities in one city. Seeing her after 10+ years was a bit mind-boggling, but she’s still my sweet friend that I remember, that’s for sure.

She’s opening up a Thai restaurant (Fork & Stix) over on the Loop, so of course I had to snap a few pics of its beginning phases.

Afterwards, we walked up and down both sides of the Loop and stopped in shops along the way. 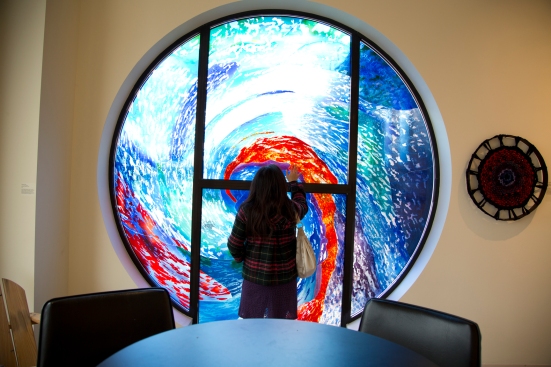 A few hours later, I headed back to the hotel and met Adele downstairs during Book Blitz at the symposium, where several authors were signing books. Or taking goofy pictures. Like Torrey and I. 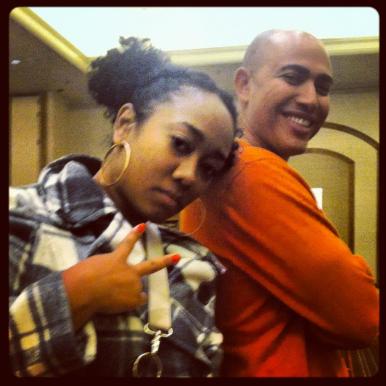 Thanks for the photo, A!

Next was dinner at the hotel restaurant with Kelly from Stacked. It was so great to finally meet her in real life!

We had pizza and discovered that she, Adele and I have the same taste in rectangular wallets from Target.

Bright and early Sunday morning was breakfast with Sarah from YA Librarian Tales! Sarah, Adele and I talked up contemporary romance, TV and movies. During the TV portion I just kind of nodded along because I don’t have an IMDb brain like those two do. 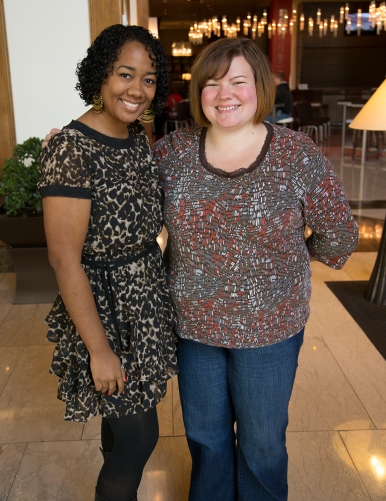 Sunday morning was Kelly’s panel, “Get Real: Contemporary Young Adult Fiction as the Next Big Thing.” I took some pictures of her and her co-presenters — Angie Manfredi, Kathryn Salo & Andrea Sowers. After sitting through their panel, I decided that I need to somehow find a month of time to read all of the books they mentioned. I also now have an actual interest in Deadly Cool. (Sorry, cover art.)

After the “Get Real” panel was the “Guys Talkin’ to Guys: What Will Guys Read Next” panel featuring four St. Louis teens (yes, actual teens!), moderator Carrie Dietz from the St. Louis Public Library, and authors Andrew Smith, Greg Neri, Torrey Maldonado and Antony John. It was an incredibly insightful panel. Andrew Smith had his upcoming novel, Winger sitting on the table and my eyeballs zeroed in on that cover from across the room — it really is fantastic. I’m also really interested in reading Greg Neri’s Yummy.

Okay, I may need more than a month to read all these books that I want to read.

And there were other bloggers and Twitter friends I got to meet, too! I met Jennifer (@yabooknerd), Gretchen (@librarified) and Sarah (@greenbeanblog)  and wished we could have spend more time together. I also met two new Twitter friends, Jessica (@whimsy librarian) and Jenna (@jenna_goodall) who were so incredibly sweet! And! I met a librarian from Arkansas! Finding another person from Arkansas in any state besides my own is a rarity, so I was especially excited about that. And she had a English accent to boot.

Wow this really is an incredibly long post. And I think it’s important for me to even note that because I’m to the point where I’m even getting sick my own typing. But there are more pictures to be had!

After the guys’ panel, we all headed out to Sweetie Pie’s (AGAIN, but a different location) where Adele had actually one-upped Antony on Sweetie Pie’s eating — he’d never eaten there before! What. We rectified this, and even spotted some celebrity lookalikes: a Diana Ross in front of us in line as well as a Samuel L. Jackson stunt double.

Making sure that we didn’t eat as much so we wouldn’t have to roll ourselves to the car this time, we went back to the hotel and walked over to the Arch.

Those little time capsules they stick you in to ride to the top are the worst. It feels like the longest 4 minutes of your life, minus oxygen but adding the smell of feet. 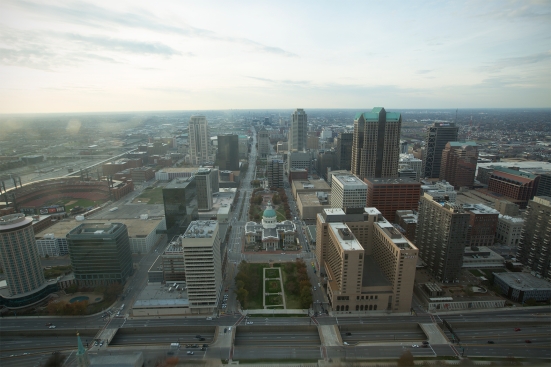 But the view is definitely breathtaking.

St. Louis, you’ve definitely been good to me and Adele. And if you’re interested, I’ve got more pictures (but less words) posted on FB.

Wow. These past four days will not be soon forgotten, nor will it be my last visit to this city. Let’s all do a meet up next time in Australia, though, yes?